Anti Social Behaviour due to Lights Being Left On 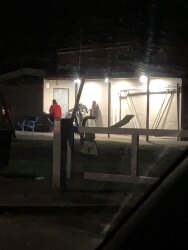 For the last few weeks there has been a lot of anti social behaviour at the pavilion in Basingbourne Park, due to the outside lights being left on. Lots of teenagers gathering and the smell of cannabis over powering, they have started to take camping chairs to sit on. The other dangerous thing is some of them are driving to go there and then driving high on cannabis. It is an accident waiting to happen. When the lights were off a lot less teenagers were hanging about at night. Not a great decision to leave them on.