Dog fouling on street and garden

Reported via mobile in the Dog fouling category anonymously at 18:15, Sunday 14 August 2022 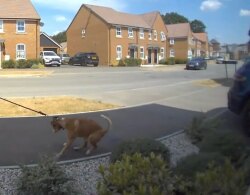 There has been another episode of dog fouling on our lovely Oakwood Grange estate. This has been going on for over a year. A young lad walked his dog along Titchener Way (near Rowlandson Way) and allowed the dog to defecate 4 times in front of our house. A suggestion of dog waste bins along the street or on the estate would be a good idea.