Reported via iOS in the Flytipping category anonymously at 20:30, Friday 13 May 2022 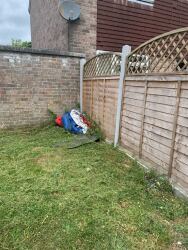 136 Hearsey gardens is always dumping stuff they don’t want on the green. 3 weeks ago they took down this inflatable Christmas decoration and dumped it on the green . We have moved rubbish in the past but it’s taking the mick now . Grass can’t be cut probably and looks a mess . Rubbish is also being dumped behind the houses at the end of road