Reported via desktop in the Abandoned vehicles category anonymously at 14:35, Wednesday 26 January 2022 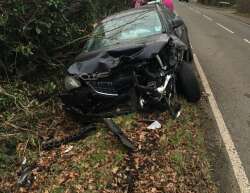 Car crashed into tree and ditch Sunday 23rd night, still there 3 days later. Traffic is very busy on The Hurst due to closure of Fleet road, wheels of car are right on edge of road. While its good in a way that the sight of it is slowing people down as speeding is a real problem here now, someone may hit it. Its also causing problems with access to the driveway its crashed next to.