Obsence graffiti by boundary to church graveyard. Footpath on pipsons lane used by families and young children enroute to school

Reported via desktop in the Graffiti category by Cllr Stuart Bailey at 12:43, Monday 10 January 2022 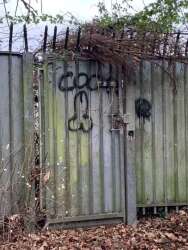 Graffiti has been here since last summer