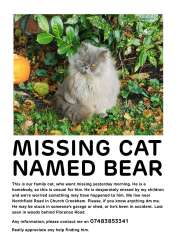 Our cat has been missing for over a week now and I had an unfortunate call to say that he might have been run over on Aldershot road and after being hit ran from under the car into someones drive way. The speed limit on aldershot road makes me think he probably has died somewhere near the incident but we cant find him anywhere.