Branches & leaves left on v. narrow pavement Hawley Road between Meadow Close and the A30 roundabout. 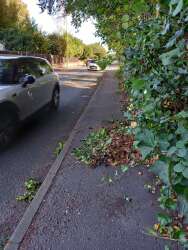 The trees and shrubbery along this section overhang a very narrow pavement which is an issuein itself. Looks like someone has tried to remedy that, but has left the clippings on the pavement which has actually exacerbated the problem as we now have to step into a busy road to get around the obstruction. Dangerous for children and dogs.