Vehicle with no MOT

Reported via mobile in the Abandoned vehicles category anonymously at 14:58, Thursday 7 October 2021 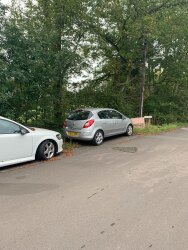 The vehicles MOT expired on September 4th and hasn’t moved in months. There are other cars parked along the same road which haven’t been used either. 8-10 abandoned cars.