Dog fouling in public not picked up by owner

Reported via mobile in the Dog fouling category anonymously at 11:26, Tue 14 September 2021 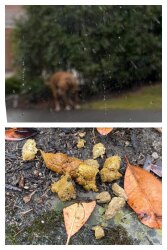 The dog (which is known to be aggressive) was off lead. The owner allowed her dog to go about his business and did not pick up after him. She then recalled him and left. (Have a video of the whole incident).