Reported via iOS in the Graffiti category anonymously at 11:01, Saturday 11 September 2021 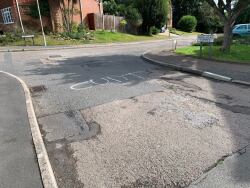 In at least three places sexually explit graffiti has been sprayed on road in white on Four Acre Coppice a frequent walkway to local infant/junior schools and school bus stops. Graffiti is offencive and needs to be removed urgently. At first it appeared to be written in chalk but on closer examination it’s spray paint.