Reported via mobile in the Abandoned vehicles category anonymously at 09:33, Fri 3 September 2021 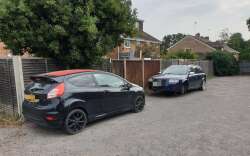 These two vehicles appear to have been abandoned in the car park next to Firgrove Vets on Aylesham Way. One is over the yellow hatched markings.