Found a dead cat left on the pavement at around 11pm on 28 Aug. It had sustained facial injuries assumed from being hit by a car not long before finding it.. Reported finding dead cat to local emergency vets but was unable to take it in so they could check for microchip. 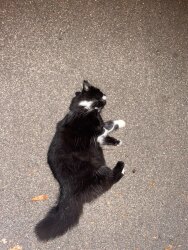