Reported via desktop in the Flytipping category anonymously at 15:17, Wednesday 18 August 2021 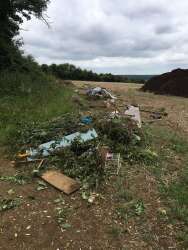 Some very irresponsible individual has once again selected this concealed spot to dump household waste. I personally collected the last pile of rubbish left by another idiot at took to HW recycling centre. Not doing it again - as another **** will simply come along and do the same.

Can HART do 3 things - clean up the waste, put a barrier / cameras up to prevent recurrence, simplify recycling centre access to remove this temptation