Reported via desktop in the Car parking category anonymously at 23:28, Friday 6 August 2021 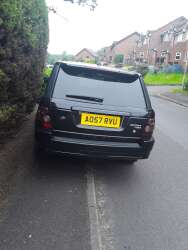 This car has been parked outside 22 Bloomsbury Way GU17 9LY for well over a month. It hasn't moved at all. What's wrong? It has completely blocked the walkway (footpath) and, in doing so, has forced the pedestrians onto the road which, from a health and safety perspective, is far from safe, especially for the elderly, children and mothers with prams. This issue was first reported to the Council in early July who declared it to be a Police matter and washed their hands off it. When reported to the Police however, they, too, conveniently passed the buck back to the Council! I have had several residents knock on my door to have the car removed, since it has caused, and continues to cause, inconvenience and danger to the pedestrians and drivers alike. I would implore the Council to pay a visit and carry out a risk assessment and liaise with the Police on the best way forward. Why? Because I pay tax to the Council and not to the Police. Further, it is infuriating to receive a curt letter from the Council, two years ago, telling me and my neighbour to trim our hedges back because they apparetly obstructed the walkway. Yet, here is this large vehicle completely blocking the walkway for well over a month and the Council, despite several reports, is nonchalant. Thanking the Council in advance in anticipation of a satisfactory resolution.