Reported via mobile in the Flyposting category anonymously at 08:07, Fri 6 August 2021 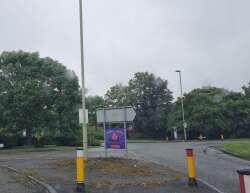 Banners have appeared on the poles of signposts on the round about. Could be causing obstruction to drivers vision. Also on the roundabout in the village centre, and Bartley Way