Reported via mobile in the Abandoned vehicles category anonymously at 13:04, Thursday 24 June 2021 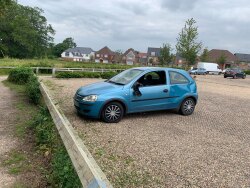 For several weeks there has been a car which I assume is abandoned in edenbrook country car park which is becoming increasingly vandalised (broken wing mirrors, smashed window etc)