Reported via desktop in the Abandoned vehicles category anonymously at 09:34, Tue 8 June 2021 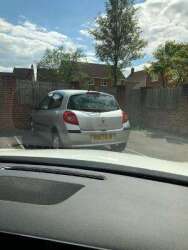 A silver Renault Clio Reg SD57 0JB has been parked in the car park off Turbary Road, Fleet for at least 4 weeks now and has a flat tyre. We have never seen the vehicle before now, made local enquires and no one is aware of the owner. We suspect it has been abandoned, and would like to officially raise a flag. The car park is located off Turbary Road, accessed via an underpass beneath one of the houses on Turbary Road. There are 3 parking bays on the right, the Clio is parked in the middle bay which is designed for visitors.