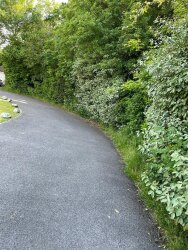 We have been told on numerous occasions that this is down to the council to trim and keep tidy yet nothing ever gets done. It’s getting so overgrown that it’s now a hazard for children going up and down on their bikes/scooters as there’s so many sharp branches. Lots of people come out and do the area behind us but never do the bushes outside of the house.