Reported via desktop in the Graffiti category anonymously at 09:32, Monday 22 February 2021 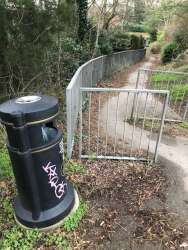 Graffiti appeared on rubbish bin over the weekend. Location: top of alleyway leading from Hereford Mead to Fleet Road. On the other side of the road, opposite lamp post number 9 - Fleet/Cove Road A3013.