Reported via iOS in the Abandoned vehicles category anonymously at 12:58, Friday 31 July 2020 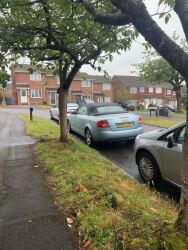 Old tatty Blue Audi has been dumped here for 3 weeks now without moving or having anyone coming / going to it. We continually have cars dumped in this street with several even being smashed up by kids when they realise they don’t move. It has no MOT and no tax. Please remove it from the roads as it should be SORN.