Reported in the Flytipping category anonymously at 11:24, Tuesday 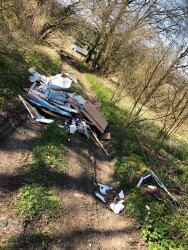 There’s a large pile of waste that has been flytipped blocking the lane, which is frequently used my motorcyclists and off roaders. It looks like the broken up remains of an old caravan.