Abandoned car, smashed windows and windscreen. No police record of it being stolen so assume just abandoned.

Reported in the Abandoned vehicles category anonymously at 21:24, Thu 15 August 2019 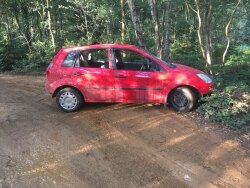 Dumped in passing space on track causing an obstruction. Police notified but I was told that no such car has been reported stolen, so can only assume it’s been dumped as all windows of car smashed. Possible vandalism/fire hazard being on a heavily wooded common.