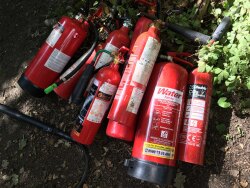 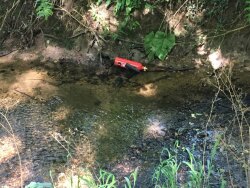 Approx grid reference SU 794516. There is a pile of 8 old fire extinguishers dumped against a tree beside the stream that runs under the Basingstoke Canal, and a further 3 in the stream itself. Some of the CO2 type were apparently leaking (seemingly 'smoking') earlier today (no longer happening, presumed now empty). Fires have been set nearby to dispose of various items of paperwork, together with the remains of possible accelerants (aerosols). It is a gathering area for gangs and it may be that the extinguishers have been taken there intentionally to put out repeated fires involved as part of regular gatherings (one presumes because the existence of the fires would give away the presence of the gangs, rather than from concern for the surrounding woodland). The area is accessed from the canal towpath via a steep muddy 'path' worn into the banking. Litter is a recurring problem already in this spot, but the fires and extinguishers are cause for serious concern. This may also be a police matter?