Rubbish and apparent vandelism and travellers

Reported in the Rubbish (refuse and recycling) category anonymously at 17:44, Sat 27 April 2019 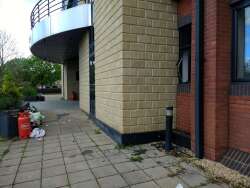 There is alot of traveller dumped rubbish and also broken windows on one building in this area. Travellers still remain and there are gas canisters littered everywhere. I know it is private land, but what are the council doing about this? Sweet FA by the looks of it. Over the last 6months this problem remains contrary to what is said to be believed from a conservative leaflet, this is a hart area and conservative run still right? Why are they not getting fined, why they still remain? I would not have a problem usually, but the anti-social behavior (littering etc) should be enforced. There has also been garden rubbish thown around on other parts of this estate and one of the travellers drives round in a landscaping van.